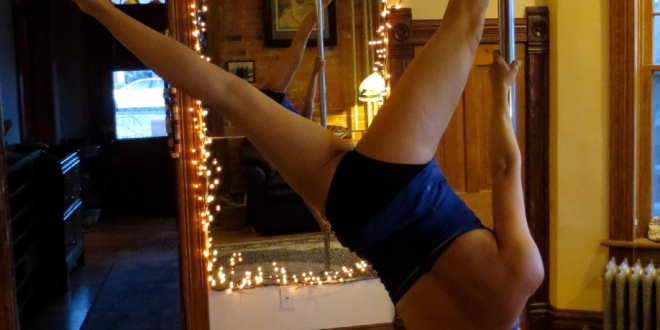 Yesterday I was kinda doom and gloomy but it’s my blog and I’ll whine if I want to.

I have many things to be happy about and, despite my morose post, I have been making progress.

I have been dying for a big old mirror with tiny lights ever since I saw a picture from Dirdy Birdy’s studio. I even considered opening my own pole studio in order to get said mirror. But then I realized that it would be easier to move my bookshelf.

Last week I purged a bunch of junk from the shelf, moved it up to the boys’ room and talked Zeb into going to Resource and picking up some mirror remnants. He stuck them to the wall, I found some LED lights and now I have the mirror of my dreams. If you are going to have a home pole studio, you may as well doll it up a bit.

I’ve been a real crab about keeping the pole room cleaned out and last night, with the little lights on, we all sprawled out on the floor and listened to music, just like in high school, only with less making out. Don’t try this in any other room in the house. So maybe I was being a tad over dramatic yesterday. I can tell the difference.

Here is a little video of the boys going to town on the spin pole. I still use it on static mode but hey, they are better than I am. It’s time to get over the strip club thing and see vertical poles for what they are. FUN! They are for awesome athletic training. Sexiness is purely optional.

Shoes and beads I got rid of yesterday but didn’t post pictures of. Seriously sexy, size 8.5.

People ask me what the hardest stuff to get rid of is. This is a perfect example. This was my favorite dress when I was in the 4th grade. I wore it every day. I even wore a sweater under it to get me through the winter. I have hauled it all around the country for 34 years but I can’t let it go. I get a little pang of nostalgia and guilt when I look at it. Guilt because I really should let it go. Since I don’t have girls, is there anyone out there whose daughter would love the darlingest little sundress? Melanie?

Smartwool socks, free of holes but outgrown. These are hard to get rid of because they are friggin’ expensive. I’m going to give them to Harmy’s son.

Wooden jewelry set from Costa Rica, they are from assorted tropical woods. Harmy has always warned me about buying things when overseas. Things that make sense in one setting often don’t translate to home very well. Like the dozen fisherman’s pants I bought in Thailand with her. Anyone want these?

Random jewelry that I don’t want and an action figure that has been on my dresser forever. FREE. 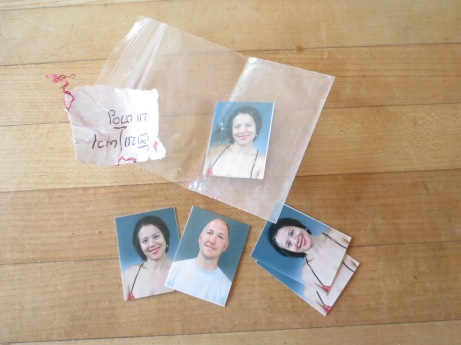 Speaking of Thailand, we took these pictures in Chiang Mai when we applied for our visas to go to Laos. These were extras. They are so sentimental to me because it was our “woohoo we are together at last” trip and our pre-baby extravaganza. We met up with Harmy and Enrique there, it was magical. Except for when Enrique pissed me off so bad about being cheap when it came to finding place to stay in Laos that I had to journal about it before standing my ground. “I love you but it is worth another $1.50 to have my own bathroom that doesn’t have exposed electrical wires everywhere.” Except for that part.